Shibuya is Japan’s premier fashion and youth mecca as well as a bustling hub where railway and subway lines come together. The station complex is divided between aboveground and underground areas, and there are arcades and department stores in each. To find your way around Shibuya Station and understand its layout, check out our article Shibuya Station Map – Finding Your Way. This article will introduce some of the facilities at Shibuya Station. 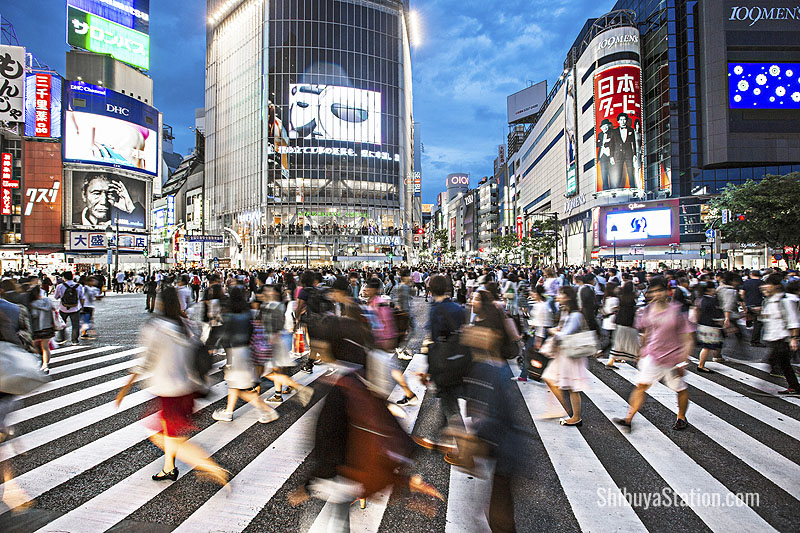 East Japan Railway (JR East) runs the aboveground JR Shibuya Station, which straddles the north-south JR Yamanote Line. The JR Saikyo and Shonan-Shinjuku lines also stop at Shibuya, along with the Tokyo Metro Ginza Line subway and the Keio Inokashira Line railway, both of which terminate at Shibuya.

JR Shibuya Station is next to the Tokyu Department Store Toyoko Branch, which has eight floors of shopping in its west and south wings in addition to food basements, as well as the Shibuya Mark City mall, which has six floors of restaurants and shops. 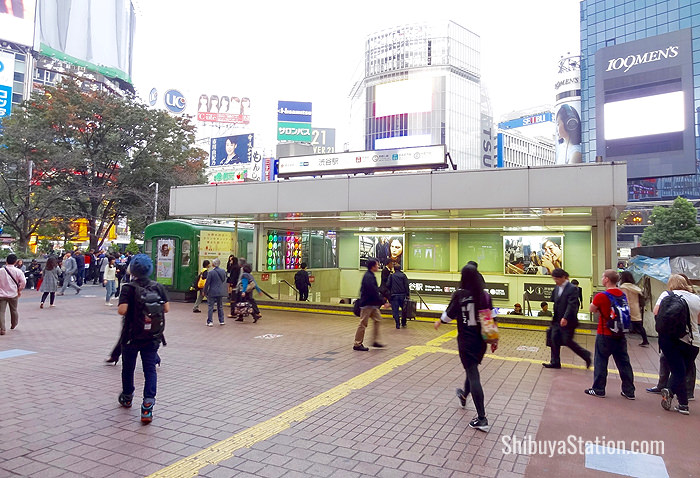 Finding your way at Shibuya will depend on which station you’re using and whether it’s above or below ground. Of course, there are plenty of signs pointing the way, but it can still be confusing.

Aside from roadside maps and overhead signs, there are several information desks at Shibuya Station, both underground and aboveground. 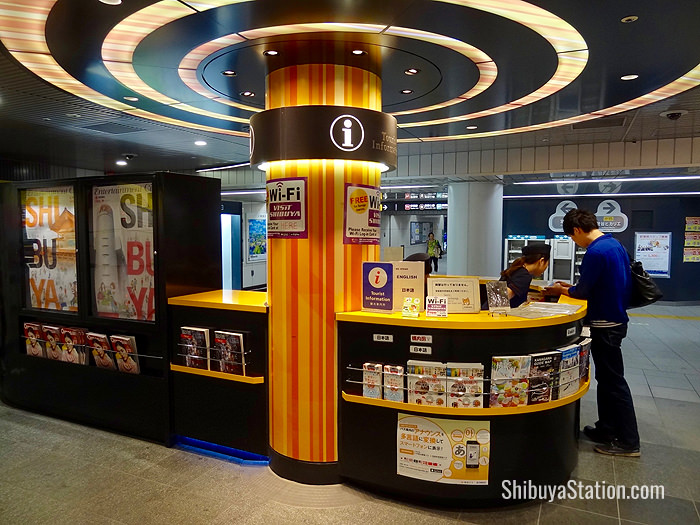 A tourist information desk in the Shibuya Chikamichi underground passageway

The best place to get information and directions at Shibuya is the Shibuya Station Tourist Information Desk, which is run by railway company Tokyu Corp. It’s handy if you’re taking the underground Hanzomon, Den-en-toshi, Fukutoshin or Toyoko line at Shibuya. Multilingual staff can hand out maps and share information about sights in Shibuya. There’s also free Wi-Fi. The desk is located in the Shibuya Chikamichi underground passageway near the Miyamasuzaka area (exit No. 10).

Staff at this center can exchange JR Rail Passes and JR East Passes and provide information about traveling on JR lines. It’s located in the South Passage of JR Shibuya Station near the South Gate. 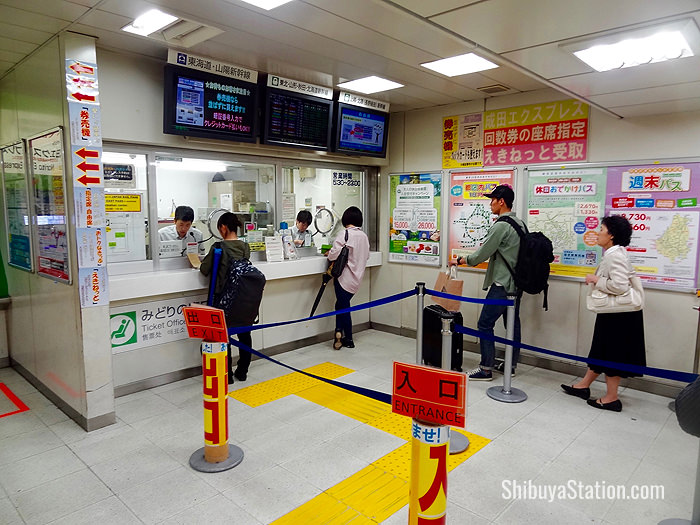 There’s a lost and found office near the passageway connecting JR Shibuya Station with the Keio Inokashira Line.

Travelex: This money changer is located near the Miyamasuzaka exit of JR Shibuya Station (exit No. 10 from the subway). It’s on the southeast corner of the Miyamasuzakashita intersection at the foot of the hill. There’s another branch on the second floor of the Shibuya Mark City East mall on the west side of the station.

Mitsubishi Tokyo UFJ Bank Shibuya Branch: Facing the southwest side of JR Shibuya Station and on the far side of the bus depot. Look for the red signs.

There are many ATMs in and around Shibuya Station but travelers should take note that most ATMs in Japan do not accept credit, debit and cash cards issued outside Japan. But the good news is you can use such cards at ATMs in Japan Post offices, 7-Eleven convenience stores and SMBC Trust Bank branches, which are also under the Prestia brand. ATM locations at Shibuya Station that take overseas cards include:

Shibuya Post Office: About two blocks northeast of Shibuya Station’s Miyamasuzaka exit, up Miyamasuzaka hill and on the north side

SMBC Trust Bank Shibuya Eki-mae Branch: This bank is located on the west side of Shibuya Station, about one block west of the South Exit, across from the bus depot and behind what is currently a large construction site

7-Eleven Shibuya Eki-nishi Branch: Located on the west side of Shibuya Station between Shibuya Mark City mall and the Bank of Tokyo-Mitsubishi UFJ, which faces the bus depot. Head down the alley and you’ll find it on the left. 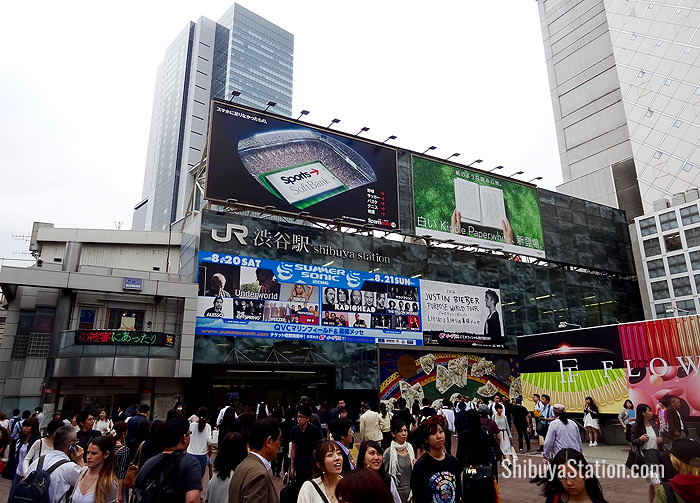 Hachiko Square’s police box, or koban, is seen at lower left in this view of JR Shibuya Station

Officers at the koban at Hachiko Square on the northwest side of JR Shibuya Station can give directions to local establishments. The police box is right next to the Hachiko Gate ticket gates leading to the square.

Ultra-dense, crowded Shibuya is being redeveloped to have more pedestrian-oriented squares and walkways, but until that project is complete, you can choose from the following for people-watching and getting around. 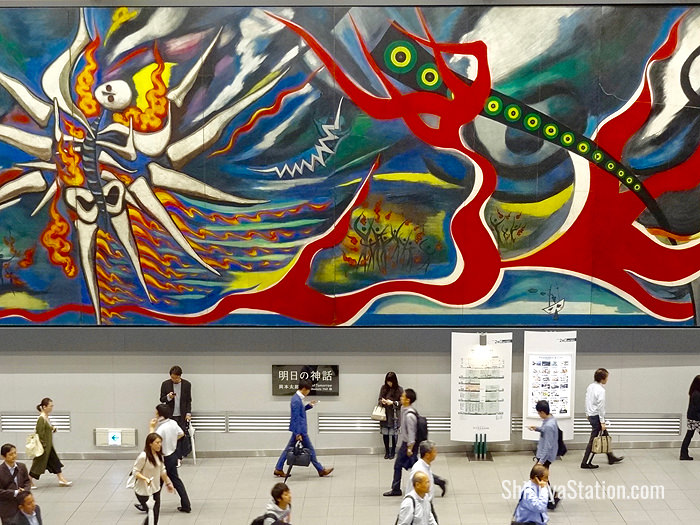