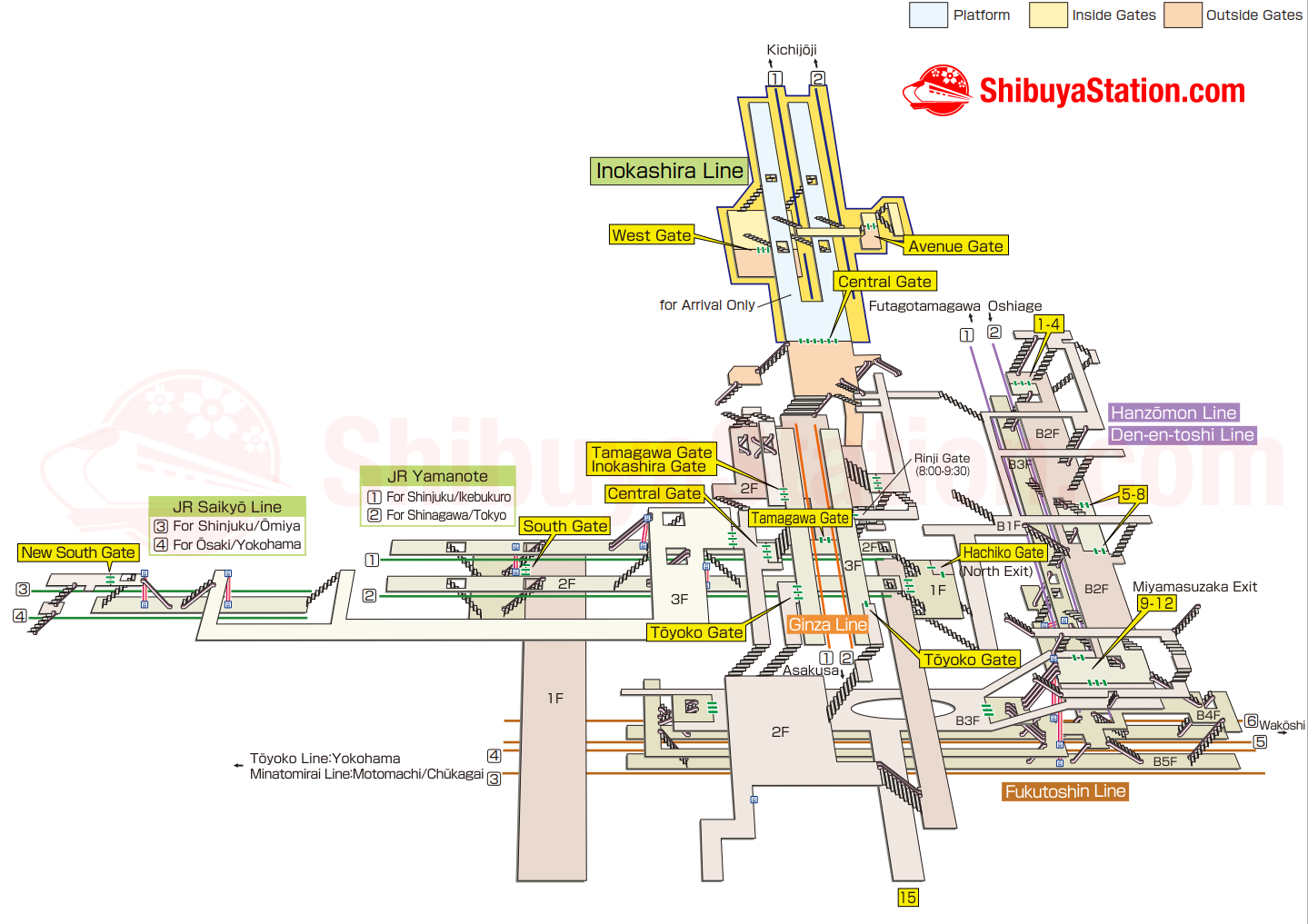 Tokyo’s Shibuya Station has a magnetism that few can resist. Surrounded by high-rise buildings adorned with futuristic giant video screens, Shibuya has a fantasy quality that evokes comparisons to Blade Runner and anime films. It’s famous for its crowds of youth, fashion boutiques, music venues and a nonstop nightlife. It’s also one of Japan’s busiest rail hubs, serving commuters from the western and southern parts of the Tokyo region. It’s also a stop on the Narita Express service for Narita Airport. 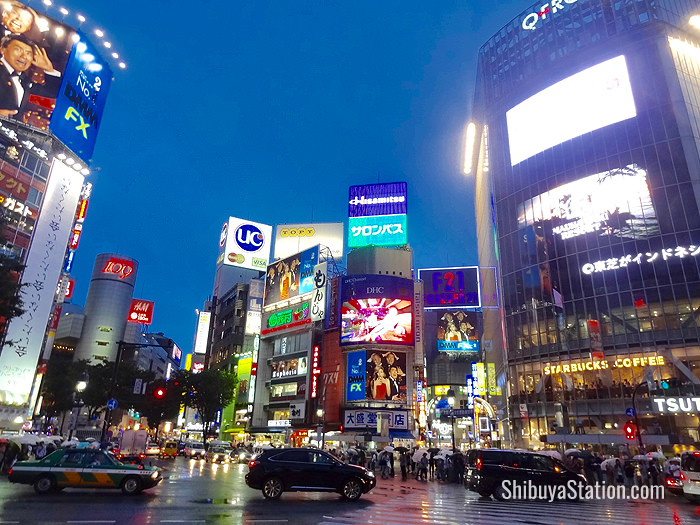 Navigating Shibuya Station can be challenging since it’s not housed in one building. It’s a large rail and subway hub that’s spread out over several underground and aboveground layers. Many Tokyoites have been confused by its current layout since the Tokyu Toyoko Line was buried deep underground in March 2013, forcing commuters to make more time-consuming transfers to the JR Yamanote Line. 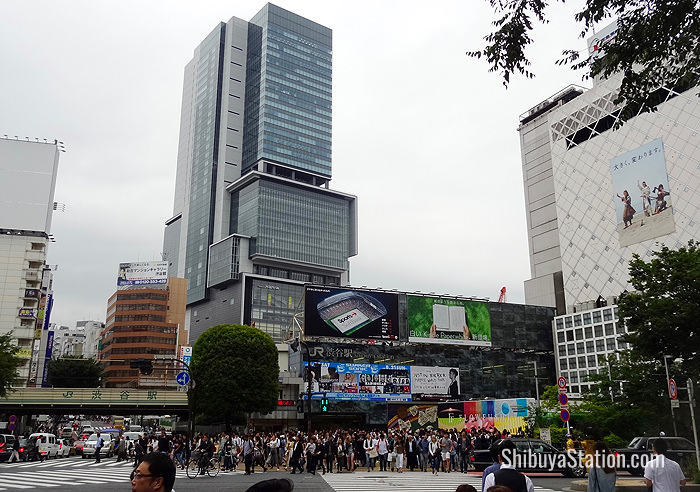 The Shibuya Hikarie skyscraper looms over Shibuya Station, which is undergoing redevelopment

What’s more, Shibuya Station is undergoing a massive redevelopment that will add skyscrapers, office blocks and condominiums to the area surrounding the station. All aspects of the project will be complete by 2027; for details, see our article on Shibuya’s redevelopment.

This article will familiarize you with the layout of Shibuya Station and its train lines and platforms. Note that construction is ongoing and buildings are being renewed at Shibuya Station, so the information presented here may not reflect what you see on the ground. 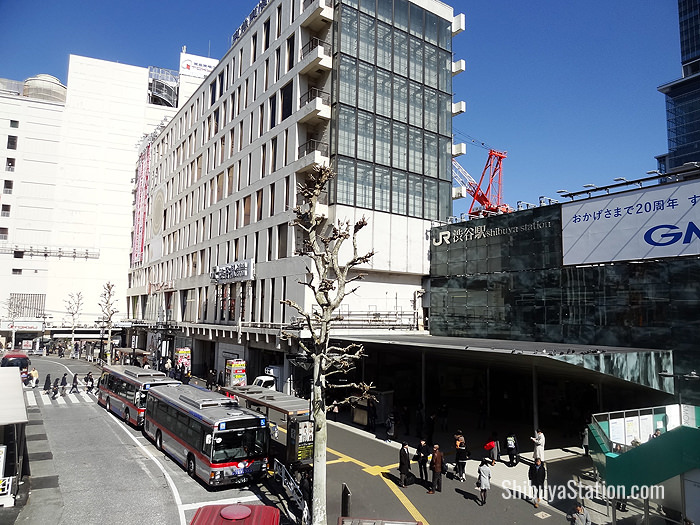 Shibuya Station consists of a mix of railways and subways, so your experience will differ depending on the rail line you use. The main points of reference are: 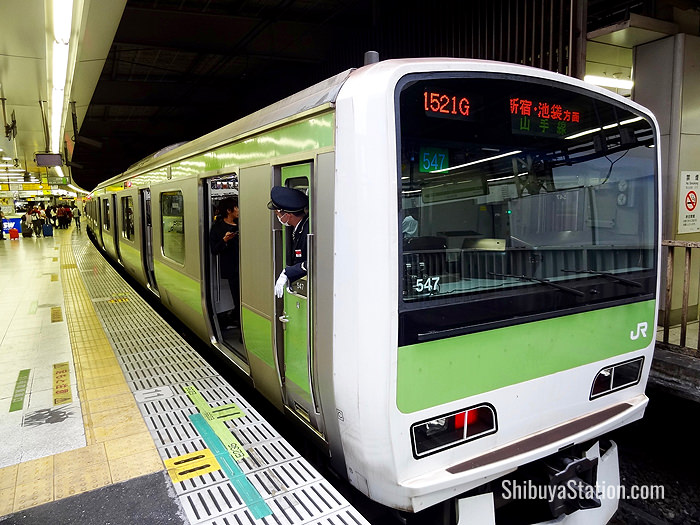 The aboveground JR Shibuya Station, which is operated by East Japan Railway (JR East), straddles the JR Yamanote Line, which runs north-south through Shibuya. JR Shibuya Station is housed in a building that’s part of Tokyu Department Store, one of the most prominent structures in the complex. The JR Saikyo and Shonan-Shinjuku lines also stop at Shibuya, but they are located further south than the Yamanote Line and are accessed by a walkway. 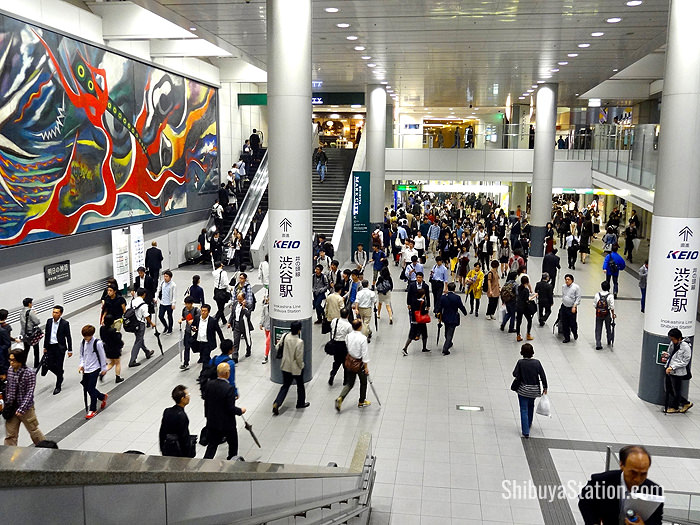 The third aboveground station at Shibuya is on the Keio Inokashira Line, which connects Shibuya and Kichijoji in western Tokyo. The Inokashira Line Ginza Station terminus is located on the second floor of the Shibuya Mark City mall, immediately west of the JR Shibuya Station; the two are connected through an elevated passageway. 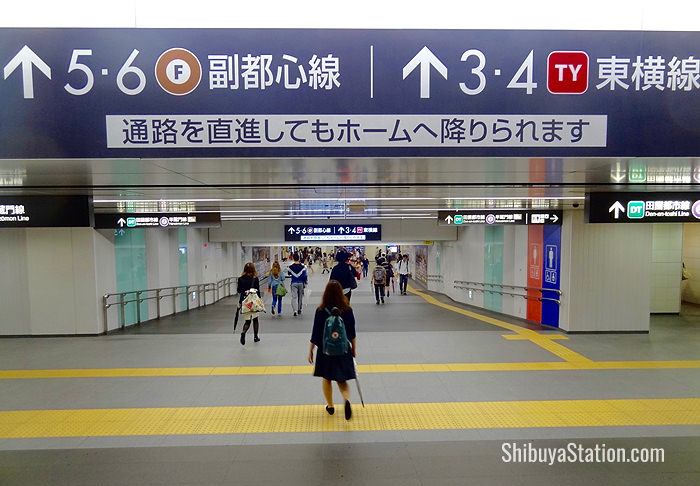 Aside from the Ginza line, there are two Tokyo Metro subway lines at Shibuya that run underground and connect with Tokyu Corporation commuter railways.

The Hanzomon Line runs east-west from Oshiage to Shibuya, where trains continue on the Tokyu Den-en-toshi Line, which runs southwest to Futakotamagawa and Chuo-Rinkan Station in Kanagawa Prefecture.

The Fukutoshin Line runs north-south from Ikebukuro to Shibuya, where trains continue along the Tokyu Toyoko Line, which goes southward to Motomachi-Chukagai in Yokohama’s Chinatown via the Minatomirai subway line.

The Hanzomon, Den-en-toshi, Fukutoshin and Toyoko lines all join in a large underground complex with common ticket gates. The complex extends from the east side of Shibuya Station to the west side; there are multiple entrances on both sides.

While it’s possible to walk the periphery of JR Shibuya Station to get from one side to the other, you can avoid most of the construction zones by going underground. 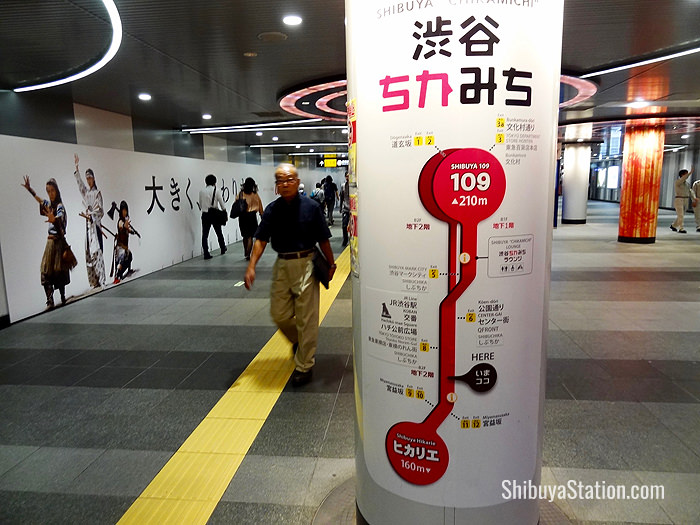 Note that most of Shibuya Chikamichi is on the second basement (B2) floor, but near the Shibuya 109 building it has another floor (B1), which isn’t nearly as extensive.

Another underground arcade that sits above the Shibuya Chikamichi is Shibuya Chikagai, a collection of fashion and accessory shops that begins below Hachiko Square (via a large staircase) and connects with Tokyu Foodshow, the basement food floor of Tokyu Department Store. To get from the Chikamichi to JR Shibuya Station, you’ll have to walk through part of the Chikagai. 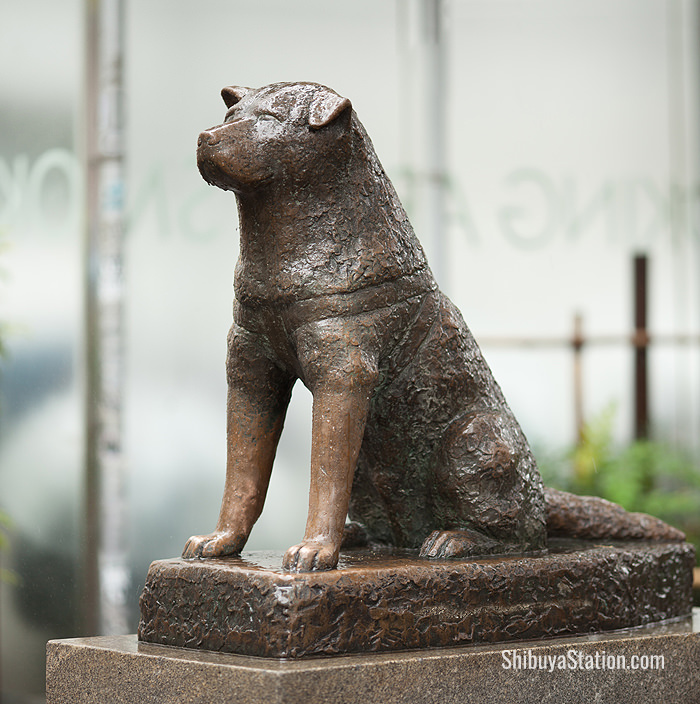 There are four main gates at JR Shibuya Station. 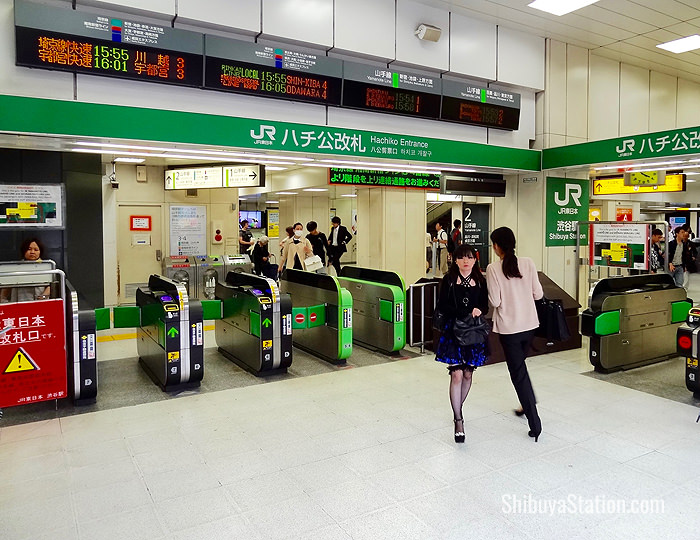 Exit 8 from the underground subway leads to Hachiko Square

There are four train platforms at JR Shibuya Station. Each is color-coded.

Platform 4: Saikyo and Shonan-Shinjuku lines bound for Osaki and Yokohama, as well as airport-bound Narita Express services. Some Saikyo Line trains have through service to Tokyo Teleport (Odaiba), Kokusai-Tenjijo (Tokyo Big Sight) as well as Shin-Kiba on the Rinkai Line. 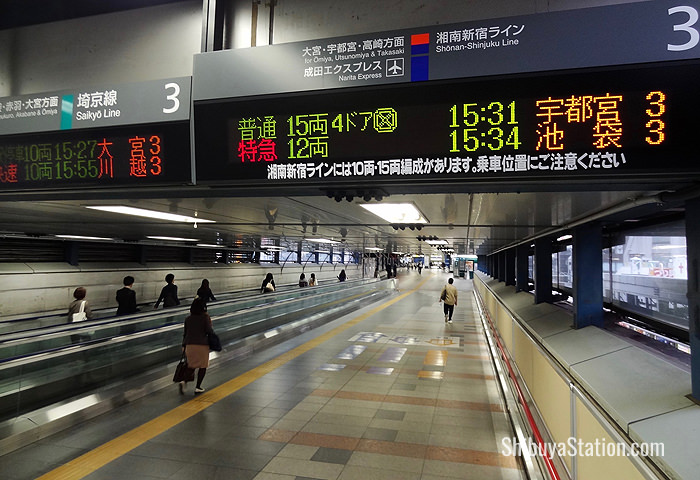 Platforms for Subways & Other Railways 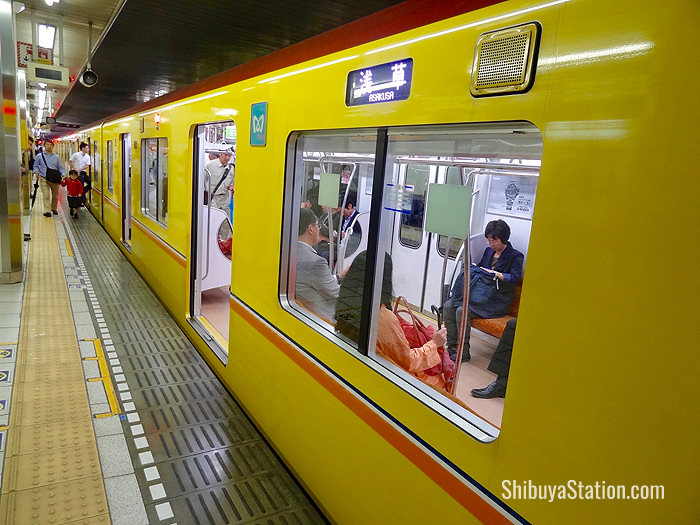